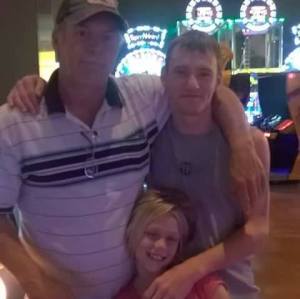 This week, my two youngest children, Caitlyn and DJ, lost their father. It was a shock to all of us. He wasn’t feeling well, went to bed, and simply passed away.

I write on here about my husband Chef a lot, but this is my first ex-husband. It was a brief marriage I had when I was young. Still, he was my age, and his death not only came as a huge shock, but it rattled me a little about how we really don’t have any promises of tomorrow. His death affected us each deeply. For me, it hurts me to watch DJ struggle with the loss of a parent he only so recently really got to spend any time with. Plus, D and I had a big argument the last time we spoke. For Caitlyn, it’s the loss of someone she was just now beginning to even converse with. Her chance to get to know him is gone now, and I think that she is genuinely broke up about that.

My marriage to D was doomed from the start, but not because D was a bad person, or because he didn’t really try to be a good husband. We were young and had no idea how hard making a marriage work really was. Our son, DJ, has a lot of the qualities D had. D was kind-hearted, non-confrontational, friendly, and a follower. I ran rough shod over him constantly, always believing that my way was better. And because it was just easier to let me have my way than argue with me, we did things my way 99% of the time. Turns out, I didn’t know what the hell I was doing either.

It didn’t take me long to realize, I couldn’t be in a relationship with a man who didn’t stand up to me. I needed to be with a leader, like myself, who would tell me I’m wrong, and make me listen to the reason why. That wasn’t D’s way, and we split up because he couldn’t be something he was not, and I couldn’t be happy with someone who wouldn’t take the leadership role in our marriage.

It’s kind of horrible to break up with someone because you realize they’re just too nice for you. It sucked to hurt him, and I will always be sorry I had to do that to him.

I appreciate what he did give me, though. He gave me DJ and Caitlyn, and that’s his immortality here on earth.

All I can say is, thank you, D. I’m sorry there was no time to say good-bye. You’ll be missed.

See you on the other side.