A Choice Between Schmucks Isn’t Much of a Choice 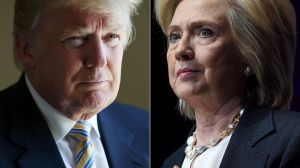 So, we have a presidential election coming up, and I for one, am dreading the outcome.

Anyone with a television set or a Facebook account knows, we’ve got ourselves a real scummy, dirty, lowdown, hit-below-the-belt contest here. I myself set off a controversy on Facebook about Donald Trump yesterday and that sh*t storm is still raging strong even at this moment.

One thing I noticed right away from enraged commentators was the assumption that because I think Trump is a sexist wart on America’s ass, I’m naturally a Hillary supporter. Let’s be clear. I am not. To me, Hillary is the same kind of politician we’ve been stocking our government with for decades – deceitful, manipulative, and elitist-like. She’s got people telling her what our issues are, but while she knows it, she doesn’t understand it. The middle class is disappearing – that’s us, not her. And it shows her lack of understanding every time she attempts to make a connection with us, the voters. She’s parroting what she has heard; she’s never lived it though.

I haven’t even once been surprised that she has leaked damaging videos about her opponent, hidden emails from the public eye, and lied, lied, lied about anything and everything. To me, she’s politics as usual. For the record, I hate her politics.

I’m not genuinely surprised by Trump’s ability to have caught our attention, either. My opinion, for the little it’s worth, is that Donald Trump has some experiences in his life that make me think he speaks our language. By we, I mean the normal, middle to lower middle classes of America. He’s a shitty businessman, so he does actually know how it feels to have something repossessed. He has had to defend himself in court numerous times against people who want to take what belongs to him. He’s a card carrying pro-gun, pro meat eating, pro beautiful women, red blooded American man. He feels like one of us; not one of them.

What has surprised me is the vehemence of the Trump supporters. I’ve long been a people watcher, and one thing I do know. When you are determined to be loyal to someone who keeps f**king up, you end up getting angry, frustrated, and defensive when people keep pointing to some things you yourself don’t feel comfortable about. You make excuses, or try to give reasonable explanations for bad behavior. I know. I was married to a meth addict.

I like that Trump has been able to pinpoint some of our frustrations, but I don’t find his proposed solutions comforting. A lot of them don’t seem realistic, and some of them are downright alarming. I’m not saying that this guy is the devil. I’m saying I don’t think his world view is large enough to make good decisions.

What I don’t like is that somehow, we Americans are losing our ability to allow each other to disagree with each other civilly and gracefully. My very best friend here in Austin, Exodus, doesn’t agree with me politically, and it doesn’t matter to either of us at all. Audra and I don’t agree religiously, but we still love each other.

Humans rarely examine the pathways that led to an opinion in themselves, but I have. I found that our brains process so much intricate information in seconds. Over time, we accumulate information that enables us to form an opinion about something, and we usually just go with it. The truth is, we should be respectful with other people’s viewpoints, especially if we disagree. No one can learn anything from each other if defenses are up, information is not delivered politely, or an attitude is copped that says you are stupid because you don’t agree with me. We all have something to learn from one another.

We’re going to end up with a shitty president. That’s clear. Let’s not end up with less friends, less sharing of information, or less tolerance, too.