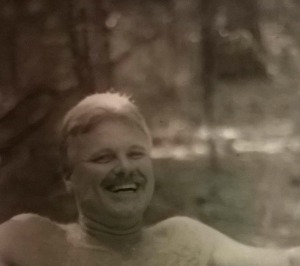 Father’s Day has always meant something specifically special to me…or, about me, as silly as that may sound. I was born June 16, 1968, on Father’s Day. I was my dad’s firstborn child, and his only daughter, and at the risk of sounding immodest, his best Father’s Day present to date, and forever. 🙂 So, my brother Michael will just have to suck it. I won the prize for best Father’s Day gift ever, back in 1968. LOL!!!

I was born a Daddy’s Girl, on Daddy’s Day, to a father I have adored 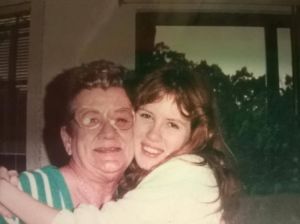 Dad’s mother and his best Father’s Day gift ever, me.

since birth. Because of decisions by other people, I didn’t get to grow up much around my father, but his presence in my life was always there, even when he couldn’t be.

Sometimes I look at my father, my brother, my mother, and myself, and how so completely typical our familial disintegration was, and I feel a deep sadness. These days, finding children raised in homes by their biological mother and father, from start to finish, are the exception to the rule. Most of us started out with one set of people, and somewhere along the way, a major change in the cast of characters happened; maybe even more than once or twice. Even my own children had a couple of major changes in the role of father to deal with. I’m as flawed as the rest.

Maybe it is the life I’ve led, or my age, or probably both, but I have a different perspective on the things that “could’ve been” or  “should’ve been”. Anymore, I am just glad things worked out the way they did. Even when my father was temporarily out of my life for long passages of time, he was still very instrumental in how I would react to some things, how I would feel about others, and overall, how I would come to understand myself and my perspective on this thing we all share called life. Anyone who knows us both will tell you, Like Father, Like Daughter. In my particular case, genetics seemed to have played a winning round in me. I have my father’s looks, his temperament, and many of his characteristics, only in feminine form. No one made this clearer to me than Mom, and rarely was any of it pointed out as a good thing either. Among my father’s family, however, it is noted as something good. I am one of them, undoubtedly the offspring of a very beloved member of it. It’s all in the perspective.

I was raised by my Sicilian mother, whose personality was the polar opposite in every way from my father’s. I’m still dumbfounded at how these two people found each other, had two kids, and maintained a murder-free marriage for several years!  Don’t take that as a slam on Mom. Being different does not equate to being lesser or better — only different.

Remember Michael Corleone’s first wife in The Godfather? Apollonia Vitelli? Well, we can all surmise logically that she and 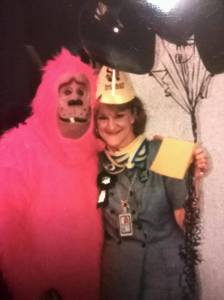 Aunt Cindy, who makes me laugh only slightly less than Dad does. Oh, and I think the pink monkey is a relative too.

Michael were cut from the same cloth, unlike Kate, his one true love. Apollonia came from a world where the men ruled with iron fists and loaded guns, and I imagine she knew seconds after meeting Michael that he was probably going to be a mafia boss one day, and what her role in that life would be. Unlike Kate, she probably would never have had to ask him about his business, because, let’s face it, she would have known already without asking. Kate, on the other hand, took quite some time to put two and two together, and when she did, she didn’t like the math one bit. She wasn’t dense. She just had a different perspective. Maybe if Apollonia had lived, and Kate had married some elementary teacher like herself, instead of a Sicilian mafia boss, The Godfather III would have been as good as The Godfather I & II. (That’s right. I blame Kate for messing up the third one! My perception; my reality.Deal with it.)

Well, that’s how it was with my own parents. My dad and mom just had nothing in common but their good looks, and trying to blend such opposing types into one set of genes to bestow on first a daughter, and then a son, was just wishful thinking. Michael and I had no choice but to come out either like our mother, or like our father. You just can’t blend night and day, and get anything but more of one and less of the other. They don’t mix.

I have a hard time truly expressing in words how thankful I am that I turned out like my father. My dad makes me laugh every

time we talk. He is just the right mixture of self-assured and confident, yet humble and realistic about his own shortcomings. He is quick to apologize for even the appearance of offending me, and is quick to forgive the things I might do that hurt him. I feel his love for me every minute of every day, and I hope he feels my love the same way. My father will go without just so I can have what I need, and he never feels like anything he does for me is enough. God chose the absolute perfect man to be my father, and without all the many, many other blessings He has bestowed on me, this one choice of my father would have been enough to make me believe He loved me.

This Father’s Day, I want to say, once again, I love you, Dad, so very much. I hope you know I adore the very ground you walk on, and there can never be a prouder daughter than I am. I’m so blessed to be part of this family, and not a day goes by I don’t feel gratitude for being one of ya’ll. Happy Father’s Day, Dad!!!

You Best Father’s Day Gift Ever,

Best Father’s Day Gift, and the tied for Runner-ups, Rebekkah and Caitlyn. 🙂