A few days ago, I had a conversation with my ex-husband about the value of words spoken. He had ended another of his relationships, and for the first time since we split up several years ago, he found himself living on his own, without a girlfriend to keep him company.

Anyone who has read about how messy our break up was will understand my hesitance to be involved with his life at all. He, on the other hand, thought we could still hang out and be best friends based on how long we had been happily

married. Now that I had gained some of my emotional stability back and appear to be as sane as I’ll ever be, I guess it was easy for him to forget how much he had once loathed being around the weepy, sad me back then, or how hard I took this heartbreak. and how long I struggled to let go. Unfortunately, I still remember it well enough to know better.

I don’t know what it is about this person, but a part of me never stops wanting good things for him. While how I feel about him has changed forever, a part of me remains firmly grounded in the hope that he will not suffer needlessly. Knowing his extremely extroverted nature, I obliged him by visiting his new house a few times while he was moving in and here or there when I can handle it.  I have no desire to be there, but the thought of him being alone and sad, surrounded by a past that will haunt him if he lets it, really bothers me. 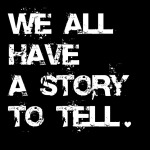 During the times I have been there, he would show me the pictures of me, of us and our children, families, friends…. all of which he had filled up the walls with. Bits and pieces of a life together were everywhere I looked… in every corner, on every wall, in every cabinet,  and on every shelf. That was hard to see. I don’t know how it doesn’t make him sad to live in this monument to a wrecked past.

As uncomfortable as it is to see our old things in this shrine he is building, that is not what keeps me from wanting to be there. No. What drives me away is his words and remembering how valuable they had once been to me.

about his affair. Things like how a day never went by that he didn’t miss me, our friendship, my laugh, our children. He would recount different times we’d been happy together, a tear slipping from his sad eyes. He would run down in detail each woman he had tried to make a life with since me, brutally showing how little he considered them worth,  and how I am the woman to which all women in his life would always be measured by. He would insist each break-up was a direct result of his inability to stop loving me and wanting me to come back to him. In other words, he was spinning a story for me with his words, but I had found letters written to other women, seen texts I was never supposed to see, and each one of them a painful lesson I had learned back then to how worthless his words really were. 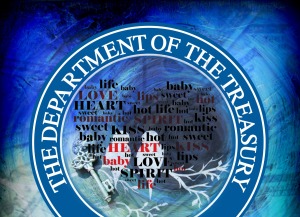 And that is when it occurred to me, words hold a certain amount of value in a relationship. In fact, you could say, like the US Department of Treasury, a relationship also has a Treasury of sorts that holds in it the value of words spoken between the two of you. Over the 20 years together, that Treasury in my heart had carried enough gold to cover his words. Trust, security, love, and hope had backed up his treasury notes to me — his words.

In a relationship, the value of our words are directly related to how often we have found them to be true, reliable, and in some cases, rare. We use our words daily, with almost anybody, and most of them are unimportant, like so many pennies or nickels, used to buy small things. Other times, words of immense value are given, rarer and not easily forgotten or replaced, belonging only to the one other citizen of that love you share, backed by the Treasury of that one specific heart.
When you take those more valuable words… the ones that were supposed to be rare and harder to 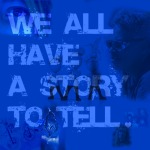 replace if lost, like “I love you” or “You can trust me” , and use them as currency for an outside relationship, or a foreign country, the value instantly begins to plummet…(the rates of foreign exchange are based on the conversion rates of that foreign economy). The lack of longevity, marital bonds, and questionable morals instantly cause the person spending his valuable words in a foreign economy to begin a descent into a emotional poverty. The foreign person does not have the riches to back up the notes, and the words that once were backed by gold and silver, now are backed with debts of betrayal, guilt, distrust, and pain.
And, as it so often happens, those once valuable, rare words come back one day, crumpled and torn from the pocket of the one who took them and spent them on someone else. They lie battered, worn, and worthless on the ground between the two people who had once loved each other so much, rich from all they had stored in the Treasuries of their hearts.

But it’s too late for what we had. Those words, once so precious a commodity between us, will never again have the value they had when things were good.
What I hope for you now is that you have another opportunity to build up value in what you do and say again, in the treasury of another girl’s heart. I believe the lessons learned now, though painful and hard, will be priceless when you love someone again. And whoever she might be out there, she will never truly know how big a price you paid to give her a better version of yourself than with me. I will always know.
Be careful. Don’t make those special words, actions, or even thoughts, each backed by the gold of someone’s trust and love in you, simply worthless by flooding another market with them.
~ Bird

9 thoughts on “Treasury Department of Our Love”