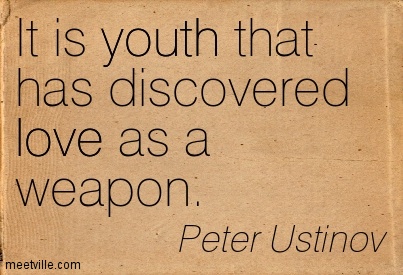 Today, the subject of parenting came up at work. Well, that subject comes up a lot, really. We have all sorts of parenting situations represented in our division, from the brand new parents to the parents of adult children with families of their own, and everything in between.

There is always something going on with someone’s children, from the funny things a child may say to the extreme and frightening things a broken child is experiencing. Parenting is one of the hardest jobs any person will ever take on. No other relationship will change so drastically over a relatively short span of time more than that of a mother and daughter, father and son. Nor will any other relationship cause as much reflection on every word spoken or deed done in it. All normal parents will regret their mistakes in some parenting situation or another. We can’t help ourselves.

For most of us, the responsibility we felt when those little helpless babies were first placed in our arms was like nothing we’d ever experienced before. Those first few minutes after giving birth, my maternal instinct was incredibly present in the room.

I could have choked a man to death with just my bare hands and my umbilical cord, to defend that little ball of flesh.

My babies’ health and happiness were my only missions in life, and each one of my children’s worth outweighed mine from the minute I felt them stir in my womb.

What I may not have realized those first few years of motherhood was that feeling of responsibility for the life I had made would never leave me again. Subconsciously, I would forever use the failures and successes of my kids to grade my parenting. My children’s achievements would always be their own, with an occasional tiny sliver of it maybe being because of me, but their failures would be mostly mine forever. Every hard lesson each one was forced to learn as they navigated early adulthood would send me racing back in my memories, wishing I’d done something different back then to spare them having to learn now.

Over the course of my life, I’ve met those parents who had good kids who became successful adults. They have well-crafted anecdotes about their “troubled” children, with something shocking thrown in, like a weed-smoking incident, showing the level of depravity they were dealing with; and it rounds out with how they fixed the problem by being fantastic parents. More than once, I considered unleashing my three hounds on clueless people like this, but I refrained.

Some people believe they were magically endowed with superhuman parenting abilities the rest of us don’t have. They don’t. They just have

different kids. Some of the most abusive, alcohol-addled parents have raised mysteriously successful, seemingly well-adjusted kids, while some of the most dedicated parents I’ve ever met have raised some real mental cases. There is no formula for good parenting that guarantees good children. We just have to do the best we can, and then let God take over when they leave the nest.

The thing is, my children didn’t follow the sitcom’s guide to what good children raised by good parents should look like. In fact, I know a lot of parents who are struggling with real problems brought on by being the parents of real human beings with their own free wills bent towards their own agendas, which often do not line up with ours.

Human beings are each unique because of the many factors that come into play to make each of us who we are. We have biological factors, environmental factors, individual  experiences, cultural factors, etc. The list goes on and on. The biggest mistake we could make as parents is to think we just created tiny versions of ourselves.

My kids were anything but little replicas of me, and they exhausted me to no end. All three were risk-taking, precocious, intelligent little people who had big plans that usually involved something that would probably kill or maim at least one of them. There really was no way I could have guessed back then that two of them would be responsible, successful adults, and one would struggle with every part of being an adult.

Parents with adult children will often second-guess themselves, but when an adult child is actively self-destructing, the natural tendency to blame ourselves as parents can make everything about that relationship hellish and dysfunctional.

My only advice to all those parents out there who are burdened with regrets sparked by their kids’ poor adult choices is to remember how complicated and complex each and every human being is. There is more involved in who your child turned out to be than just your mothering or fathering.

For the mistakes we have made as parents, an apology and explanation are a good thing, but they should never be allowed to become weapons in the hands of another person to use as a crutch for behaving like a childish toddler who didn’t get his way, including your own children’s hands.

Explain. Apologize. Forgive yourself. Let it go. Ignore any further reference to it, especially when it becomes the catch-all excuse for a grown child who won’t grow up.

Mothers are easy targets when it comes to needing someone to blame, and kids in families everywhere are seemingly adept at using emotional weapons like shame, humiliation, and rejection to manipulate parents (primarily, mothers) who genuinely love them into accepting some of the responsibility for their kids’ problems, cleaning up emotional, financial, or physical messes for them, and supporting them when they don’t feel like taking care of themselves. Even worse, the best mothers in the world can find themselves the very worst kind of help for their children, mistaking unconditional love with unconditional rescuing.

Ironically, the parent-child relationship must develop healthy boundaries, metaphorically severing an emotional cord that bonded them together like a physical one did at the beginning of it. We wouldn’t dream of trying to maintain the umbilical cord connection with our child. There comes a time when the emotional connection needs to be adjusted to accommodate two adults instead of a parent and a child.

8 responses to “When Regrets Become Weapons of Mass Destruction”