My Ocean of Problems: #3 Toilet From Hell 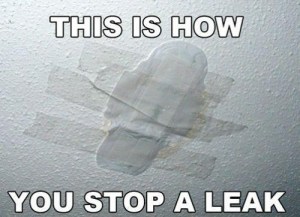 My next rant is about the stupid toilet in the Blue House. I’m convinced it is straight from the depths of hell.

I have satan’s used toilet.

Since Day 1, that thing has never worked correctly. Besides being a year-long petrie dish for The Plague until the landlords were forced to clean it, it would run constantly. At first, I thought the chain on the thingy-bob inside the tank needed to be shortened because it seemed to get stuck under the stopper thingy. That helped for about 6 minutes.

Then, the tiny extra pressure on the rusted out chain caused it to break. I next rigged it so the chain was McGyver-ish but dependable and sturdy…..

And then the plastic part that actually held the chain broke off, not an hour later.

We started to turn the water off completely at the floor to keep the water from running constantly, and that worked for about a week and a half. Then the seals broke, and all the turning on the knob in the world doesn’t stop the water.

I bought a kit to replace the whole thing, but now, I can’t turn the water off to replace it. The landlord obviously has no intention of addressing this.

Bird – Not even in the game anymore

Toilet – Laughing its Tank Off

This has been going on so long now, the sound of running toilet water instantly pisses me right off. 😦

Dad is on his way up from Austin, and he says he can fix it for me. Poor Dad. I have a pretty long list of stuff I need help with.

11 responses to “My Ocean of Problems: #3 Toilet From Hell”