You Are What You Read

Facebook is always good for a little distracting fun. My best friend, Audra (My Best Friend Cheats At Board Games, Stonking Best Friend) posted this: 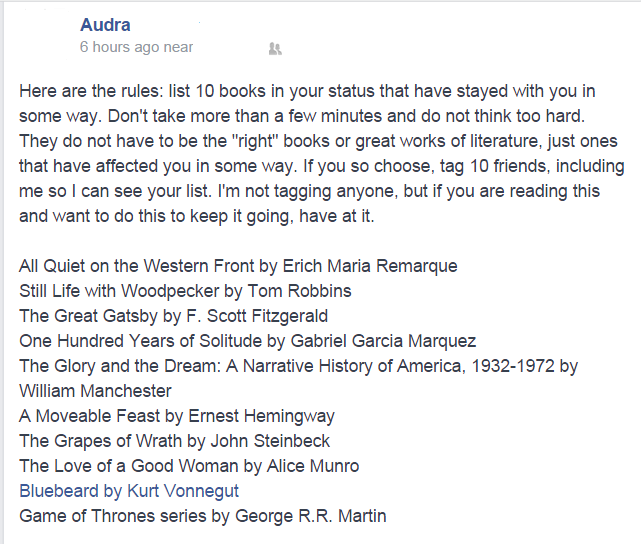 And since I’ve read a zillion books, I thought it would be fun and maybe even a little self-illuminating. I gave myself only 5 minutes to come up with the books, and here’s what I came up with:

The Eye of the World Series by Robert Jordan

Touch the Wind by Janet Dailey

The Chronicles of Narnia by C.S. Lewis

One thing I noticed right off the bat is that I read 7 of these books as a kid, and 3 of them in my early twenties, except for the last of the Eye of the World series which took 20 years for the author to complete. Cool, right?

For instance, Touch the Wind was the first graphic romance novel I ever read. I was about 13 and we were staying with my mother’s sister, my Aunt Pamela. Both Mom and Pamela were avid romance readers, and you could find those books everywhere in the house. I had been allowed to read Grace Livingston Hill (Christian romance writer) and a few mild Harlequin’s (boring!), but those thick books were off limits. I snagged Touch the Wind, and proceeded to spend the next 6 hours hiding in the bathroom and outside in the shed with a flashlight reading about Rafaga and Sheila, the honorable kidnapper/thief and the poor little rich girl. Let’s face it. It was hot.

Decades later, I bought that book again and read it as an adult. Wow. What was I thinking? I laugh my butt off at how not politically correct it is to fall in love with your kidnapper, who raped you and convinced you he did it to protect you from other rapists. That is, after he gunned down your abuse new husband while he and his gang were robbing you. For obvious reasons, reading it again kind of took the shine out of the memory for me. Yikes.

Each of the books on my list has some other memory linked to them for me, and it was fun to recall some of that stuff.

I hope everyone has a wonderful Labor Day weekend!