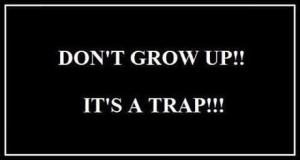 I am involved in a situation at the moment that makes me want to write about raising Christian kids. You Christians do remember, we are in a spiritual war, right? Are you raising warriors, or are just chumming the spiritual waters with these ill-equipped new semi-adults? I am inclined to think people forget that we are training our kids to be adults one day, not mutated extensions of ourselves. At some point, they need to fly, and you either taught them well or you didn’t. It’s that simple.

First, I’ll lay out some credentials. I have been a Christian since age 8 or 9, raised in several churches, and periodically attended a Christian private school. My poor mother did not really have a clue how to raise kids to be adults. Because of the instability of my family, I ended up attending many public schools as well as attended several different churches, and attended some of their schools. I have had the rare privilege of having lived in both worlds – the harsh real one and the religious spiritual one. It messed me up.

I was just a weird kid. I was so naïve at times, people sometimes thought I was faking that rare innocence. I didn’t know what gay or lesbian meant, I accidentally offended the first black person I met, and just the sight of a tampon machine could make me blush bright red. I had crushes on boys, hopes to be picked for plays, played in sports, and dealt with the crisis of childhood, high school.

I ended up getting to put what I’d learned about Christian principles into practice in a public school, with its very real worldly temptations. My mother desperately hated me interacting with the heathens outside of our religious circle, but money for private school wasn’t always there. I am so fortunate it worked out that way.

I guess we all have those one or two things our parents did that we swear we will never do to our kids. My sore spots with Mom were arbitrarily expecting blind obedience constantly, without any explanations of the reasons at all,  and raising kids who were helpless, clueless adults. I had to break away harshly from my mother, and while I hated her being angry with me, I wanted to be free more.

I already wrote about using explanations to build bonds of trust between you and your kids. Now I want to touch on raising up warriors, not sitting prey.

Parenting is hard for everyone, but Christians have eternal souls at risk added to their plates. None of us can stand the thought of any of our babies going to hell, and we all work at varying levels and with varying successes to make sure our kids are “raised up in the way they should go, so when they are old, they will not depart from it”.

I can’t say I really had a plan for raising my kids, per se. I talked to mine a lot, even when they were tiny. I explained anything and everything if possible when it came to my decisions, even if it was only to tell them I just wasn’t up for a long discussion and would they just please obey me. And I told them about God, His Word, and how it was important they always find out from the Bible if anyone, even me, told them it said anything. I did not make them say salvation prayers as little kids, and I did not overly shelter them from the world they have to live in one day. They learned quickly that the world is full of people with bad problems, and that life is neither fair nor is it easy. It’s often messy.

My kids went looking for God on their own. They weren’t an extension of my relationship with the Lord, and I let them come to their own decisions about Him. They are each at different points in their walk. And if there is one thing I do know, it is that I was never going to be able to manipulate, bully, or cajole them into being good Christians, no matter how good my intentions were.

I’m dealing with a 20 year-old, adopted young pastor’s daughter (Angela) who has come to live with us for the moment. She has been homeschooled, and only allowed social contact with the members of the congregation her father is the leader of. She was allowed to take a job babysitting for a family down the street from her parent’s house for $50 a week. She lived with this family, took care of three young children, one with severe autism, and allowed to work  a very part-time position at a Chick-Fil-A, Employer of Only The Christian Homeschooled. She had been attending college, but her duties with the wards interfered, and her grades suffered so much, she dropped out.

Rebekkah came to me beside herself because on the one hand, she cares for this girl who seems to have latched on to her from nowhere. On the other hand, she has finally found a church home, and she had a feeling the pastor would not like us helping his daughter get out of under his thumb. And because he is the pastor, he could easily lead his congregation to reject her as well. Already, Rebekkah is being passively aggressively shown their displeasure.

See why I don’t miss going to church? Christian behavior has taken a back-seat to very earthly clique-ish manipulations, and by the pastor no less.

I thought about it, prayed, and then decided to not turn this girl away. I simply don’t care if a whole church gets mad at me. It won’t be the first time!

Here is how I outlined my reasoning and my decision:

Angela is going to be fine, but she’s a prime example of raising up soft, clueless adults who aren’t ready to survive life, much less any spiritual attacks. They will be introduced to the harshness of reality; shouldn’t it be while you are still there to teach them?

I am kind of appalled at the behavior of all of these seasoned Christian adults. They are reacting to a very normal, common occurrence in families everywhere since the dawn of time as if Angela is committing some blasphemous sin by not obeying her parents. It has not occurred to any member to call out these odd manipulative behaviors in their pastor, but instead, jump on the chaos bandwagon to make all of this much bigger than it really is. At some point, your kids don’t have to obey you!

Hello! That obeying thing doesn’t carry through until one of us dies!! You become an advisor when they are adults. Hopefully, they will trust you enough to listen to you.

13 thoughts on “When The Christian Kid Breaks Free”