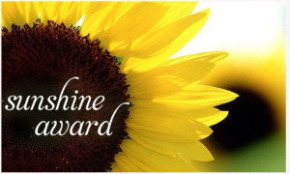 I’ve been awarded The Sunshine Award by my fellow blogginian Art Mowle who writes at  Drinking For A Lifetime!

Art writes a firsthand account of the experience of getting sober after 43 years battling alcoholism. As a person who has also struggled with addictions, I feel a certain kinship with others who know what this kind of slavery can do to the life and mind of a person. I hope you check out his site.

It’s been a really, really long time since I publicly accepted one of these awards so please forgive me if I repeat some of the “interesting” things about me from before. I have only a finite amount of interesting things I can share publicly. The rest are for me to know, and you to never, ever find out. 🙂

Ten interesting things about me.

And now for the rules.

To accept the award, each awardee must do the following:

HometoGo232 – Diane has a way of expressing herself that reminds me of my mother. She’s helped fill a void in my heart and I can always count on her gentle encouragements through whatever disaster I’m facing at the moment. I love you, Diane!

Jennie Upside Down – Jennie was born in 1976, and the world has never been the same since. I imagine from reading her writing, and especially her comments on here, that she speaks a lot like I do. She tends to use the same kinds of phrasing I would, and she can say a lot with just a few words. She’s a kindred spirit.

AllThingsBoys – This site is written by a woman almost the same age as I am. While this isn’t as exciting news as it once was in elementary school, I find myself interested in people who have recently finished raising their children and are suddenly able to concentrate more on themselves again.

Spiritual Abuse Sanctuary – Scarlett writes this blog, and she has found a niche helping and encouraging those who have been abused by organized religion in churches. As with anything, any organization that wields a lot of power can easily become corrupt. In far too many cases, that corruption in a church setting can cause indescribable harm to those they are supposed to shepherd. She loves The Church, but she’s not a big fan of the organized religion we have in practice today.

So, there you have it folks. Thank you again for always showing up to check in on me, and thanks again, Art!!!