Awhile back, The Huffington Post conducted a survey about the minute that people knew their marriage was over. In what I thought was a cute twist on a morbid topic, the 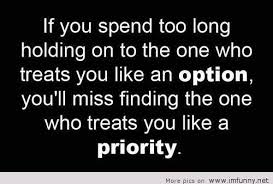 contributors were to tweet their enlightening moment, which, if you are at all familiar with Twitter, you know, requires a substantial amount of skill with pithiness because you only get 140 character spaces, and that includes the spaces between each word. For me, it’s next to impossible. I like to think I’m thorough and detail-oriented. Please let me just keep thinking that, okay? 🙂

The fact that people were asked to boil down a really, really traumatic moment down into Twitter’s Tweet proportions tickled my interest, and I set out to first, narrow down my Tragic Lost Year down to that single moment I knew it was over; then, second, I tried to describe said moment within the very strict character count of a single Tweet. Then, I had to be witty with the description so that my contribution to the article would stand out in a crowd. Frankly, for me, it was like trying to pick up my car and carry it to the store on my back. I’m not pithy at all.

I worked pretty diligently on this little project despite my shortcomings, and it wasn’t until I’d completed it, and submitted it (repeatedly), that I discovered the deadline to

send your tweet had been months and months ago, and quickly after that deadline date passed, they’d published their slide show, which had been very popular, so they had left it there ever since.

All of that information was right there on the page to find…I just hadn’t looked for it. I was the proud owner of a witty tweet with nowhere to let it fly… Which brings me to what I’m writing about today. Lately, there’s been this huge hurricane blowing through my mind. I feel like I’ve been at this fork in the road, and this time, I truly, truly had no idea which road to take.

Fork #1: Chef is sick, alone, and depressed, and while I know full well that he brought most of this down on himself, I for one would hate to actually get what I deserve in this life. Therefore, I don’t tend to want others to get their just deserts, either. That being said, there were real actual moments that I fantasized about him, lonely and broken and repentant, crawling back to me with promises and tears. I imagine most jilted wives have taken the occasional moment to do the same. J What I hadn’t taken the time back then to really consider was how this act of contrition on Chef’s part, should it happen, would complicate the newly structured life I’d be living in by then. With my tendency towards being co dependent, coupled with 22 years of memories I’d been reluctant to accept were over, with Chef’s illness sprinkled in, all threw me into indecision and confusion. Here, for the last month, all that I had daydreamed about, and hoped for, back when my life first came crashing down around me, was right here happening in my present moment, almost to the letter exactly how I’d hoped it would go. And yet, I felt nothing like I thought I would. Shouldn’t I feel somehow satisfied? Or at the very least, vindicated? The truth is, all I felt was uneasy and kind of inconvenienced.

Fork #2: I’ve said a million times that I never, ever want to experience that kind of pain and betrayal again, and I meant it wholeheartedly every single time I said it. Even though I can honestly say that the drugs made him into a whole different, low-budget kind of person, I would be a fool to think that there wasn’t a possibility we’d travel down this same road again should we get back together. The odds that Chef, an addict now for life, wouldn’t betray me, cheat on me, and just leave me behind in a quivering pile of pain in his quest for eternal youth, had gone up much higher than ever before, and the toll that his choices took on me are just too significant to not merit some real, serious, deep meditation before any decision be made. I just can’t go back. There’s been so much damage inflicted, not to mention our collateral damage (our children), that even the most unimportant, mundane conversations will be spiked with suspicion as I look for hidden motives, secrets, and everything that he says is considered a lie first, and then the truth only if there is tangible proof otherwise. I can forgive. I just can’t forget. It simply cost me too much.

The Decision: This last month since T left Chef, I’ve ridden this roller-coaster in my mind, listening first to Chef’s words and then watching him fail, and fail, and fail to deliver on any of the promises he’d made to me.  It’s become a cycle with us, and one that even his girlfriend was able to point out. Chef would do or say something that I find bone-crushingly offensive, and I’d storm out of his life. Two or three days will click by, and suddenly he must make sure I’m okay, which usually leads to something really romantic like texting me lyrics to my favorite songs, or just showing up on my doorstep to go to coffee. Then, my heart will soften towards him, knowing he is physically sick and academically moronic these days, and I’ll let my guards droop a bit, toying with the temptation to cling on to what is familiar to me. And bam! It would harden again with a few careless words from his mouth, which he never seems to understand why they were so painful. A fight always ensues because he is clueless and I’m pissed that he is so clueless. And I storm away, out of his life forever…for about three days. The cycle has gone on for months now, and we’ve never missed a creepy beat.

Since T left Chef, the cycle has continued. Yet, the added bonus has been that I’m struggling to decide whether I should come home and take care of him. Thoughts blow into my mind, swirling around like a hurricane. My thoughts ran something like this:

Should I move home? I really, really loved Chef, and maybe we could make the magic happen again.

Wouldn’t  this be the greatest act of loving your enemy? Moving home and taking care of the cheating spouse, quietly, meekly, and without thought of reward?

Oh, puhhleeeze! Who do you think you’re fooling, Bird! Going back to Chef would be a nightmare for everyone!

I’d be the crappiest martyr ever. I’d complain when he grossed me out, snap at him if he didn’t like what I cooked,  and lose my temper the entire time if he even hinted at critiquing my efforts. I’d be struggling to constantly not throw my selfishless-ness right in his face any time I felt unappreciated or over-worked. I’d try really hard not to do any of this stuff, but I’d fail. The seeds are there in my heart. The circumstances would make them grow.

He’ll do it again. He didn’t care that he’d done all of this stuff to me until his girlfriend dumped him. The timing is suspect. I’m unable to believe he loves me.

He can’t even keep his word now..I’m supposed to believe he’ll only get better? I doubt it.

I don’t want to be a psycho who has to examine everything her husband says or does just to have the tiniest sliver of peace of mind! How ironic if I actually became a psycho to match the lies he told himself and others about me being hormonally imbalanced to justify having an affair over a year ago?

Back and forth, the decision seesaw-ed, and I was exhausted from the indecision and rather irritated at myself.

And then it came to me, not like the Twitter-worthy submission I’d carefully structured for entertainment, but like a breeze across a meadow….gently, quietly, and without fanfare. Last night as I watched “The Help” on tv and played with my cat, I just knew. There were no convincing arguments pounding through my head, and no twists of pain from somewhat tender wounds that are healing to launch the defensive fear I’ve been hiding behind lately.

The decision was uneventful, not Twitter-worthy, and rather unassuming as it landed in my mind. I won’t be going back to Chef. I’ll probably be there for him as a friend until the day he dies, but I won’t be his wife ever again. He can take that little that I can offer, or lose me completely. It’s all I can offer.

It’s easy for some people, like me, to assume that every big moment in our lives will be loud and distinctive, whether a celebration or a tragedy. Yet, I find that I appreciate the quietness and peace of a turning moment in my life that no one will find particularly witty entertaining, or even Twitter-worthy. In fact, I’ll go so far as to say, I hope the rest of the big moments of my life are the quiet kind.