Chef Likes To Make An Impression

When Chef and I moved to Oklahoma 9 years ago, neither of us had any clue how different our lives would become. Being largely from

big cities, Chicago and San Antonio, we had not noticed just how closed off we had become. Our adult lives had become so routine, working during the day, eating dinner at night, going to bed, and starting all over again in the morning.

All of that changed one day when I bought Chef a motorcycle, and within a month, we suddenly were making friends. It was a rather odd awakening for me, realizing just how closed off Chef and I had been all these years, and I have to admit, I was nervous about letting people into our lives. But Chef was just eating it up, and I eventually relaxed enough to make a few friends myself.

We really hit it off with another couple that I will call Brett and Sunny. They had been married a little longer than Chef and me, had raised two kids to adulthood, and had similar senses of humor. We spent a lot of time before the accident with them.

One day, we were out taking a joy ride on our motorcycles, when we all decided to go back to our house. Brett and Sunny had never been to our home….In fact, no one really had. Yes, we were that secretive.

So, Chef led our little group, and soon it became clear to me that we weren’t actually going the right way. We were travelling through Tulsa‘s more up-scale neighborhoods. I remember thinking that Chef was trying to impress Brett by showing off the well-off neighborhood located right next to our rather lower middle class one. Silly, I thought, but I went along.

Finally, Chef turned into a really large, fancy gate with initials weaved into the top, and down a long, long winding driveway,surrounded by immaculately groomed lawns and flower beds, surrounded by majestic, sculpture like trees,  up to a mansion that went on for days. Here is a picture of what it kind of looked like: 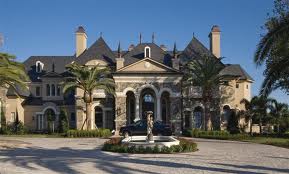 Getting off the bike, he told Brett, ” Just leave the bikes here. I’ll have someone move them to the garage.”

Brett and Sunny could barely keep their mouths from hanging open as they dismounted and began following Chef to the front door. Right before he got to the door, Chef burst out laughing.

“Just kidding….This isn’t our house..,” he could barely get the words out, he was laughing so hard.

Brett and Sunny started laughing nervously at first, and then really, really hard.

We got back on the bikes and drove down the large driveway, out the fancy gates, and left behind the gorgeous neighborhood, heading back to the real world. It was a pretty funny moment for me.

I always wonder if there had been anyone in the mansion, and if there had been, what had they thought seeing a patched set of bikers who obviously were club members, drive their motorcycles up to the front door, turn the bikes off, have a conversation where everyone is laughing hysterically, and then get on the bikes and leave just as mysteriously as they had appeared… I know it would have freaked me out anyways, probably for weeks to come.    🙂

18 responses to “Chef Likes To Make An Impression”