Be True To Yourself, Or You’ll Become Constipated

Don’t ask my why, but girls just seem to love “bad” boys. This never became more apparent than when my husband earned his patch, and became a member of a large well-known motorcycle club. Instantly, I was thrust into situations that I was ill prepared to deal with.

There is no culture that I’ve ever seen that rivals the biker culture for its attractiveness to random women. Slap a 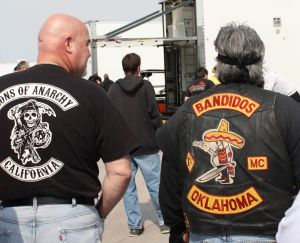 patch on the back of a guy, watch a few episodes of Sons of Anarchy, and these men become like catnip to cats. Add in the rumors that the media programs like Gangland and Outlaw Bikers fuel, and a marriage is suddenly launched into the midst of temptations that it has never had to experience before. And many years ago, this is where I found myself.

For a people watcher, this was an interesting turn for our lives to take. Not only could I see how my husband dealt with the issues of being in a club with a reputation, I also had a front row seat to watch how the women responded to being branded second-class citizens in this culture. And one thing I noticed right off the bat was random women’s willingness to physically kick my butt, thinking, I guess, that their physical prowess would immediately make my husband break up with me, and thus earn them a coveted seat on the back of his bike. Seriously, people?

Now, let me be clear. I am no fighter. Not when it comes to being physical. You want to sling witty insults at each other, I’m in. I can hold my own. But I’ve never understood the desire to “throw down” with another female. It all seems so ….unladylike…Add in the fact that I’m a Christian, and you can see, I had some real problems here.

Bikers hang out at bars. It is just what they do. And bars are the hunting gounds for lonely men and women, so it seemed that a lot of the times when we would go out, some random woman would decide I was the weakest woman in the bunch, and like a lioness cutting me off from the herd, would zone in on me to take down. Of course, my pack (the other club women), have never allowed these predators to be successful, and have done my “throwing down” for me, but still…it is all very rude.

My husband thinks it is absolutely hilarious. I mean, he knows I don’t like confrontations, especially the physical kind, and so for some woman to think she’s going to “take him away” from me, just makes him laugh and laugh. And a note to those aggressive women out there: my husband finds a woman who fights repulsive. If you kick my butt, you are guaranteeing he will NEVER look your way again, as a friend or otherwise. He finds the practice unbecoming of a lady, and he only married ladies…FYI…

It quickly became clear to me that I was going to have to work on my own image, or else take a karate class or something. I can’t be labelled the mark every time we go in to a public place. So, I began to work on my “dangerous” and “mysterious” look. My aim was to not look like the weakest one in the place, at the same time, be able to avoid having to fight for my turf. My husband made me stop with the mysterious look, though, because he said I just looked constipated, not dangerous, and he was tired of people asking if I was sick..ha..ha. Very funny.

I am happy to report, though, that these days, this phenomena doesn’t happen much anymore. The up-side to being the weakest woman in the pack is that the other mama-bear-fighting-women have taken me under their proverbial wings, and protect me from the great expanse of fighting women in the lonely world of bar memberships. Win/Win.

One thing I’ve learned from all this motorcycle club stuff is that I am not letting what an expanse of club members and their women think about me change who I am. I’ve earned my little place in the “family” and all without having to “throw down” to get it. I wear my Star of David with my cross around my neck, and I’ve had a surprising number of discussions about Jesus with the people your parents warned you about. I’ve had people who have lost someone show up at my house in the middle of the night, wanting some answers about my God. I’m known as a Christian, and that makes me happy.

No matter what situations or clubs you find yourself in, being true to yourself and to what you believe in is the one way to earn respect from those around you. Trying to be what you are not is only going to make people around you think you are constipated!!

If you get a minute, check out this article: So, A Child Molester and a Little Kid are Walking in a Forest…. I wrote it today for 20 Lines A Day… Thanks! 🙂

38 responses to “Be True To Yourself, Or You’ll Become Constipated”