My Thoughts on Marital Arguments

Yesterday, I spent the entire day on the back of a motorcycle flitting from place to place with my husband as we ran errands together. It was a beautiful day for riding. I enjoy times like this also, because there is something soothing to my husband about these pretty days riding in the wind, as he puts it.

Because motorcycles are really, really loud, you tend to spend a lot of time thinking to yourself, mainly

Don & I after riding forever in the rain…March 2012

because conversations with the driver are both distracting and open to interpretation of what he actually hears, which can be almost nothing I’m shouting at him. I find it is better to just converse with him when we stop, and just let him drive in peace with his own thoughts.

My thoughts turned to a friend of mine who recently told me that she and her husband had never, ever even once had an argument, and they’ve been together for 4 years. I tried to imagine never having argued with Don, my DH, and it completely alludes me. We don’t argue much these days, but over the 20+ years, we’ve had some spectacular fights. Most of them I couldn’t even begin to tell you what they were about, but I can tell you that had you been a fly on the wall, they would have been impressive….purely for the dramatics of the whole thing.

Don is a passionate Italian/Mexican American Guy, and I’m Irish/Italian American Girl, (and that is Sicilian Italian, thank you very much), so when we get into it, no one is backing down. Compromise over the years has been something that we’ve had to learn, not something that came naturally at all. Even to this day, we have to agree to disagree on some subjects, because no one is conceding defeat. It is what it is…. 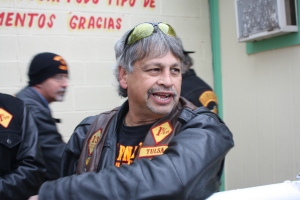 While we were enjoying a much needed lunch together, I asked Don if he wished we never fought with each other, or that we’d never disagree. I told him about my friend, and what she had said about her relationship. Good ole Don. He didn’t even hesitate.

“No, Bird. I like that you won’t back down easily. You’ve maintained your own identity, and you let me have mine. We may fight, but we always make up, and something about that makes me love you all the more. Sometimes, I like having to earn your respect, even now. We’ve been able to stay individuals. I think that is good for people like me and you.”

It was a nice compliment for me, and I thought I’d pass it along here. It is okay to be passionate, even in disagreements, as long as forgiveness is forthcoming and quick. There are times I make Don nuts, and other times he makes me insane, but he isn’t boring, that’s for sure.

Just a little thought I had….

37 responses to “My Thoughts on Marital Arguments”