The Time I Burnt Down a Truck I Was Test Driving

One of the things I am learning as I write these little excerpts from my life is that this is one really good way to stop trying to “be”  anything other than yourself.

I have run in a lot of circles. I went to Christian schools and public schools. I have friends — I’m talking real friends that range from atheists all the way up to pastors, and everything in between. My kids love the Lord, but 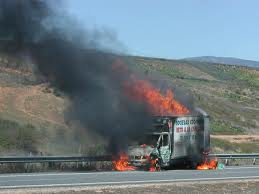 This isn’t my truck, but I imagine it looked something like this…

they cuss like sailors sometimes…as I’m sure people are going to notice from some of their posts on this site. Actually, my son who is busy composing a story for this blog is the one who cusses the least in this family…go figure. And now I find out that some of the motorcycle family I’m in read it too, along with my mother-in-law and sister-in-law. And after being initially alarmed, I had to laugh. There simply are lessons in everything. It is just better to stop worrying what other people think of you, and just let it all hang out. It is definitely a lot less work.

So, that all being said, let me share one of my finest moments.

When the kids were little, Don was asked to go to Laredo and “clean up” a distressed restaurant there. He is gifted at managing restaurants, and over the years, we had moved from restaurant to restaurant all over Texas. He’d get them profitable again, and then we’d move on to the next one.

At this time, we’d pretty much stayed in San Antonio for quite a bit of time, and I had landed a really, really good job. So, since the company estimated it would only take Don 6 months to clean up this restaurant, we chose to live separately so I could hang on to my job. We’d travel once a week or so to see each other, but it wasn’t ideal for our kind of relationship at all. My kids were acting out…they have to have their dad around, and I don’t know that we’d built up enough trust in each other at that time to be completely okay with this. So, since he seemed to have put roots down in Laredo, we agreed on one of my visits to see him that I needed to go ahead and move back home with him.

Problem was we both drove tiny cars, and there was no money to move. When companies moved us around, they always paid for the moves. But that wasn’t the case this time. Don, being the charming guy that he is, went to a car salesman friend of his and explained the situation. The guy, named Sam (not his real name), suggested that since it was mainly clothes and small stuff, that we “test drive” one of the big pick-up trucks for the weekend. We were assured this was a common occurrence, and that the extra miles on the truck wouldn’t matter, because it was already slightly used. Sounded perfect.

So, the next morning my little 6-year-old son and I head off to San Antonio to get our stuff. We sang and talked, and talked and sang all the way down there. It was great because we’re both tone-deaf so we couldn’t tell we really sucked — we had a blast. It didn’t take all that long to get our stuff together, and the next morning we were headed back towards our new life.

I have been able to overcome some serious vices over the years, but the bane of my existence is smoking cigarettes. I haven’t mastered that one yet. There are just some things that my brain can’t do without having a stupid cigarette in my hand. Here’s my list of cigarette must-haves:

Wake up – smoke a cigarette

Talk on the phone – smoke a cigarette

Get ready for bed – smoke a cigarette

There are many other cigarette times in between, but these are MUST haves…I’ve tried quitting, but that is a post for another day. Suffice it to say, I haven’t given up — I’ve just remained a complete failure in this area.

So, I’m happily speeding my little boy and I down the highway, windows open, flicking cigarette butts out the window as needed, because we wouldn’t want to return the truck with a dirty ashtray, when Dj freaks out. One, or possibly more, cigarettes had caught our stuff on fire in the back of the truck I was supposedly test driving, and I had a pretty awesome fire going on.

There are too many failures in this story. First, yes, I was smoking around my son. Second, I was Messing with Texas by throwing them out the window. Third, I obviously wasn’t paying much attention to anything around me, because I didn’t just see some smoke; it was a full-fledged fire going on over the rolling gas tank I was driving. There are so many more, but you get it…

I pulled the truck over to the side of the highway, scooped up my boy, and we stood what I would determine a safe distance from the inferno, and waited. We didn’t own cell phones and there used to be almost nothing between San Antonio and Laredo except for one small prison town that only the truly brave would ever stop at. And we’d already passed through that town awhile ago. I watched the truck begin to melt, and I knew — I’m getting another divorce.

As luck would have it, people started pulling over, and while the women began to collect over by me, their fire-bug husbands started “playing” with the fire, pulling burning boxes and quilts out of the back of the truck and stomping out the fire with their feet. Now, I’ve had a flat tire on this same route, and only AAA would come to my aid. No one else that time would stop. But, hey, start a rolling bonfire, and everybody is your friend….

One of the less-than-amused wives had a cell phone, and she called 911 and let me borrow it to call my husband. My husband is….passionate. So, I was actually happy to be delivering this news to him on a phone at least 60 miles away. It meant I had about an hour to live.

Me: Don, I started a fire in the truck, and it’s burning up. I’m sorry.

Don: That’s not funny. When are you getting here?

Me: I’m not kidding. I really burnt down the truck, and all our stuff in it.

Don: Seriously, stop it. I’m not in the mood to play around…

Me: I’m not playing around. I need you to come get me.

Ok. I have to stop here, because the rest was pretty disturbing.

After the fire had been put out, all the firebugs and their wives split, and DJ and I were left with the Texas State Trooper that had taken our report. He was really trying to be serious and professional, but he couldn’t help laughing at me. A lot. Insultingly, a lot. He packed me and Dj into his car, saying he couldn’t leave us by this truck until my husband showed up, so we’d ride with him for a while and we’d check back for Don occasionally. Okay, that part was actually pretty fun for us.

Finally, Don and my girls showed up. After inspecting the melted truck, Don tried turning it on, and lo and behold! the thing still drove just fine. We all headed back to Laredo — me in my Mercury Topaz and Don in a lump that might have been a truck once upon a time.

Sam wasn’t as freaked as you’d think he’d be. Instead, he gave us an address in Mexico, and told us to get it fixed before we brought it back — he’d cover for us for the extra time.

Viva la Mexico!! The place we took the truck had it looking like a brand new vehicle, exactly the same as before I destroyed it, all in 2 days, for $300! We returned the truck to Sam, and nothing ever came of the incident again. Cool.

My point with this story is just that there are going to be aspects of my life that are going to appall someone I know — more so with some, while others will be able to relate. But this is just a true story. I am what I am.